Skip to content
By Andrew Madden. Andrew has recently graduated from LJMU with a BA in History.

For this assignment Lucie asked us to create an output that had some relevance to the course. My first thought was to create a collage on the changing face of Liverpool, from the Victorian Era until the present day. But then I began to think that I wanted to undertake a project that had never been attempted before in this module. I had also come across an article written by Ross Hyzer which claimed that board games were “enjoying a renaissance”.[1] It seemed only fitting that I should create a board game.

Moreover, I wanted to ensure that discovering the history of the Victorian city was not only fun but also unique. I knew I wanted to undertake a project that would allow the participant to consume and enjoy history; I felt a board game was the perfect way in which to achieve this. As Jerome De Groot’s has argued history is consumed by the general public, and it is through studying this consumption, that we can understand popular engagement with the past and how it is represented.[2] This opens a new argument between both public history and academic history which often are seen to have a conflicting relationship.

My target audience for this output was Secondary School Pupils aged 12+. It was hoped that the board game would be a fun classroom activity. As I would like to become a teacher in the future this project, or something very similar, is something I could possibly incorporate in my classroom. It also links with the current History curriculum for Key Stage 3.[3]  The board game could also be aimed at anyone at an exhibition with a keen interest in the Victorian period.

The board game I originally chose to produce was Victorian Monopoly. However, after a study of the logistics and the time frame I had, I soon realised this was not feasible. After ruling out Victorian Guess Who and Jack-the-Ripper Cluedo, I finally settled on Victorian Blockbusters. I thoroughly enjoyed this 1980s game show and believed I could create a board game interpretation with questions based on the Victorian city. This links in with De Groot’s idea that ‘‘historical ‘knowledge’ in these manifestations is the command and recall of a set of facts – generally dates, leaders, events or places”.[4] 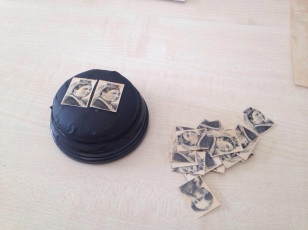 I created many of my questions with this quote in mind. The questions ranged in difficulty but were all general knowledge questions about the Victorian era. The game comes with a board which players must cross by answering questions correctly. Teams could choose to be either Queen Victoria or Charles Dickens. I chose these two Victorians because they probably two of the most iconic people from this period. The game also comes with two buzzers for players to buzz in and answer the questions. The game comes with a rules page, which explain how the game should be played. I covered the pages with a wet tea bag, this made the paper look old and worn. I designed a box for the game to be stored in. I decorated the board game’s box with images, of Victoria and Dickens and an image of a Victorian workhouse and a department store. These images were chosen to depict how cities incorporated the two nations.

The board game was tested on 21 April 2015 by myself, Shona Crossan, Katherine Corrigan, Dr Lucinda Matthews–Jones and Dr Emma Vickers. The four players were split into teams and asked to choose a character; Katherine and Lucie were Queen Victoria, while Emma and Shona were Dickens. We played two rounds of the game with me acting as the host. I then supplied them each with a feedback sheet. The sheet contained questions asking them to rate how much they enjoyed the game, and what they liked, disliked and also any improvements they would make. The general consensus was that the game was very enjoyable and the fact that it had buzzers was great – no one disliked it. There were two improvements suggested by Lucie and Emma. These improvements were, firstly, that the box for the game could have been more authentic and, secondly, that a time limit on answering questions was needed. These are points that if I was to make this game again, or undertake a task such as this in the future, that I would keep in mind.

One thought on “Andrew Madden, Board Game Antics”