I recently stumbled on this photograph of Henrietta Barnett in her Hampstead Heath office. I love it. Having previously thought about her husband, Samuel’s study, it is wonderful to challenge the idea that such spaces were the prerogative of men. This photograph somewhat jars with the more feminine image conveyed by Samuel Barnett’s account of Henrietta’s tea table, which he described as witnessing the foundation of Toynbee Hall and the Whitechapel Fine Art Exhibitions.

But Henrietta was more than a hostess. She was a committed social reformer working passionately and energetically for children and young women. She is largely remembered for her work with Toynbee Hall, the Children’s Country Holiday Fund and the foundation of Hampstead Heath garden suburbs. She worked tirelessly with London’s poor and wrote numerous essays. There is evidence of this work in the photo. Head bent, pen posed, she is shown writing. Stacks of paper and folders can be found on and by the desk. Although the picture has been taken to show Henrietta at work, the viewer’s eyes are drawn not initially to the desk but to the room itself. It brims with ornaments and pictures, including a Vermeer painting given to Henrietta by Queen Mary. The arrangement of the room speaks of homeliness and comforts, from the wallpaper and furniture, including the chaise longue. The room also stages her personality and confirms the value Henrietta Barnett placed on objects.

Peering at Henrietta’s office has forced me to also think about my own office. Early in January I ran a session for students on the use of material culture as a historical source. I remarked to these MRes students that we rarely understand the pull and power people placed on their rooms and objects because the value we give these spaces are usually felt rather than expressed. As I look at Henrietta’s room, I’m left wondering what are the personal biographies of the paintings and furniture?

With that I swivel on my chair and take stock of my office. This isn’t my first work office. Over the years I’ve had several. Rooms empty of personality or full of someone else’s, I’ve even had make shift offices. My current office isn’t even a ‘room of one’s own’ to borrow Virginia Woolf’s phrase. I share with a colleague, the wonderful Emma Vickers. Creating this space hasn’t been easy. We’ve had to demarcate space and make defined areas. I feel guilty that my half of the room is larger and that my personality – i.e. tea cups- spill into Emma’s half. As I work principally in my work office, I have been compelled to make it a ‘home from home’ by silencing the more institutional aspects of our office. At LJMU we all have the same desks, filing cabinet and one book shelf. There is one wall painted purple. I’ve appropriated a round table and have draped it with an embrodied linen table cloth. 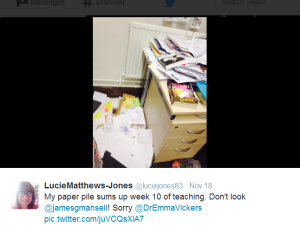 Much like Henrietta Barnett, I have filled my half of the room with clutter; books, tea cups, postcards and pictures. Unlike Henrietta Barnett, however, my office does not feel particularly ordered. The longer term goes on, the larger piles become. Photographs do not always express the lived aspects of spaces. They are staged to illustrate the way that people want to be seen by the world at large. How different would Henrietta’s office have felt had she been lying down on the chaise longue? How different would my office feel if I didn’t have the mess? But then I remember Witold Rybczynski’s claim that ‘Hominess is not neatness’ and those articles that have recently decried that messiness is always more ordered than people assume (1987; 17).

My MRes class likewise revealed the difficulties of reading for personality. For this session I took in one of my tea cups and asked the students to write on a piece of paper the first thing that came into their mind when they saw my yellow cup. This question could have been based on their reading or a personal assumption. Many of the questions wanted to know more about the non-human biography of the object and thought of it primarily as an apparatus to drink tea. They wanted to know how we could think about the cup’s manufacture.

But, before all of that, we discussed the cup itself. I asked them to tell me what words they would use to describe it: ‘feminine’, ‘dainty’, ‘dated’, and ‘quirky’ are some that stick in mind. Some noted that the tea cup had a particular aesthetic value to certain groups. I couldn’t disagree with them. Yet I couldn’t help feeling my own personal connection with the tea cup was being lost. Many of the words the students used to describe the cup have, at times, been used to describe me. I am certainly more attracted to the alternative folk, indie scene. But, my love of tea cups, come as much from my grandmother. She doesn’t drink out of a mug and as a child she collected small tea services. They now make up a substantial part of her cabinet of curiosity. I adored hearing her talk about these tea services when I was a child; how much did they cost? Who gave them to you? Which is your favourite?

A future historian might one day research our offices. Just as I peer into Henrietta Barnett’s office I wonder what they will think of my office’s arrangement. Will they look at this office as an overtly feminine space? Will they see the clutter of tea cups as a sign of my indie, alternative background? Maybe they’ll see how they, together with other elements of my office, mark a certain type of homeliness. After all, we all want to be at home in our offices and for Henrietta Barnett that meant turning her room into a beautifully cluttered study.

One thought on “At home in the Office”